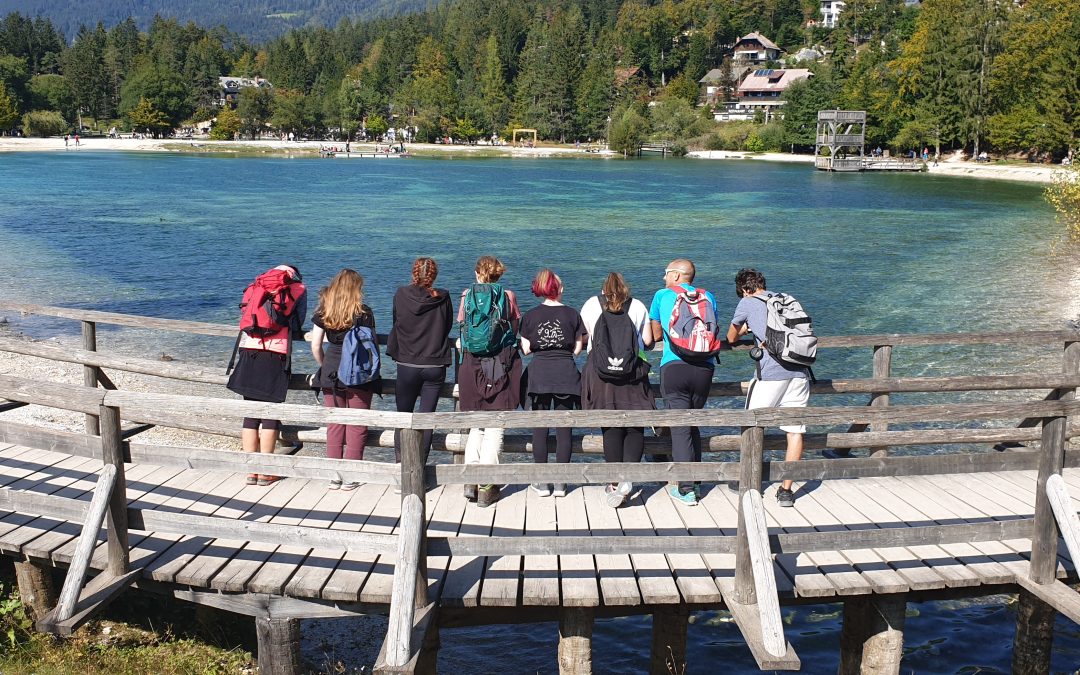 Our new member Tija experienced the teambuilding weekend like this:

On Friday, September 18, 2020, we went with a residential care group to Kranjska Gora for teambuilding weekend. After class, we were picked up by a van that took us to the Trata apartments in front of Kranjska Gora. We got there around 5 p.m. Even before we settled in, we ate fresh apples from the trees. While we were watching the sheep in a nearby enclosure, the educators prepared some fun and group games for us. In the first game, we had to go through holes made of string. The game was challenging, but it also brought us a lot of laughter. In the next game, we had our legs tied together and we had to get to some point so we could only step on the newspaper. We solved this task fairly quickly. The last task was not difficult because we only had to show a scene in which there were sheep. Then we settled into apartments. Since we didn’t have any oil with us, we went to “borrow” it from the neighbors, and in return they got pancakes, which made them very happy. Of course, we ate all the other pancakes for dinner.

My favorite event on the dating weekend was the baptism. Namely, they prepared very interesting and funny tasks for us newcomers to join the group. We had to identify the highest peaks in Slovenia, sort the educators by age and invent a choreography for three songs. We also played pantomime. We had to eat a piece of lemon for every wrong answer. My favorite part of the baptism was when each of us told 4 statements and the others had to figure out which one was a lie. We went to bed around 11pm.

On Saturday morning we got up a little later than we are used to during the week, ate breakfast and made sandwiches. Then we drove to Planica, where we borrowed bicycles. The first part of the cycling led past the Zelenci nature reserve. There we looked at the lake. It was very nice. Then we cycled to our apartments where we ate sandwiches. Satiated, we sat back on the bike, ready for new adventures. We cycled along a very nice bike path between the trees where the railway line used to run. Our end point was under the Peričnik waterfall. When we all gathered, we went on foot to the waterfall, which was 45 m higher than our end point. We first looked at it from the front, and then we went even higher. There we went along the path that led to the waterfall. It was very nice and I would recommend it to anyone. The way back was already tiring, but we achieved some achievement that we set for ourselves, despite the fact that a chain was torn on one wheel and a tube was broken on the other. We also drove past the ski slopes. Around 18.00 we drove back to Planica, where we warmed up with cocoa and tea. We drove back to the apartments by van. We made a very good dinner there. We sat by the grill and baked meat and cheese. In the evening we played some more Activity. At the same time, we did not lack laughter and fun. Thus ended our second day.

The next morning we woke up to the pleasant pain of cycling. In the morning we drove to Lake Jasna. From there we walked for about an hour and a half to the hut in Krnica, which stands at 1113 m above sea level. The path to get there was very beautiful, as we walked along the river and through the forest. We rested in front of the hut. After the rest, we headed back to Lake Jasna. It was interesting to me that we were able to pour water from the river into the bottles, which was very good. In the end, we took another walk around the lake and took pictures. Then we finished our trip to Kranjska Gora. On the way home, we stopped for pizza, where we chatted a bit more. At 18.00 we arrived back at the housing group in Črnuče. We were tired but satisfied. The weekend was a good experience for me and I’m glad I experienced it.